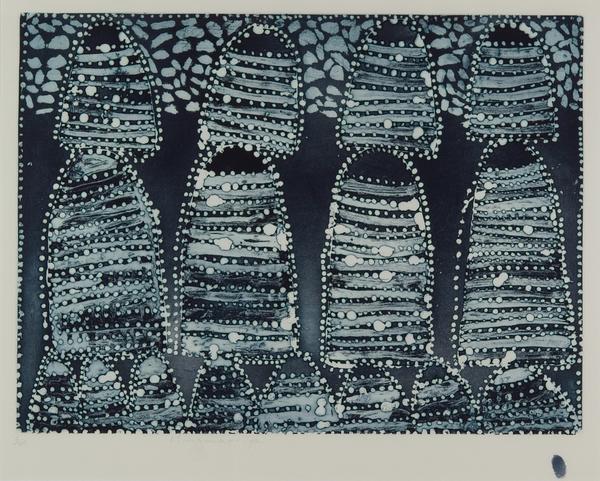 Queenie McKenzie is from the Malngin and Gurundji language groups. The Youth Advisory Group acknowledges her, the Traditional Owners and Elders who shared this knowledge and artwork.

Queenie McKenzie is from the Malngin and Gurundji language groups. She is one of the most prominent painters of the Warmun (Turkey Creek) community. Born at Texas Downs Station to a First Nations woman and Euro-Australian father, McKenzie was at the centre of tense encounters between her mother and local government authorities as a child. They sought to take her from her family, however, on each occasion, McKenzie’s mother strongly resisted.

In her later years, she moved to Warmun. After witnessing the success of the male Warmun artists, in 1987 McKenzie was the first woman to begin painting in her community. McKenzie was also encouraged by her long-time friend, Rover Thomas, one of Australia's most preeminent Aboriginal artists.

In less than a decade of her painting career, McKenzie emerged as a prominent voice on the Aboriginal experience. McKenzie was a prolific painter who created works that reflected themes that were important to her life. Many of McKenzie's paintings were autobiographical or reflected social issues from her community, including the impacts of colonialism.

McKenzie was a significant cultural leader whose intimate connection to Country was generously celebrated in each of her works.