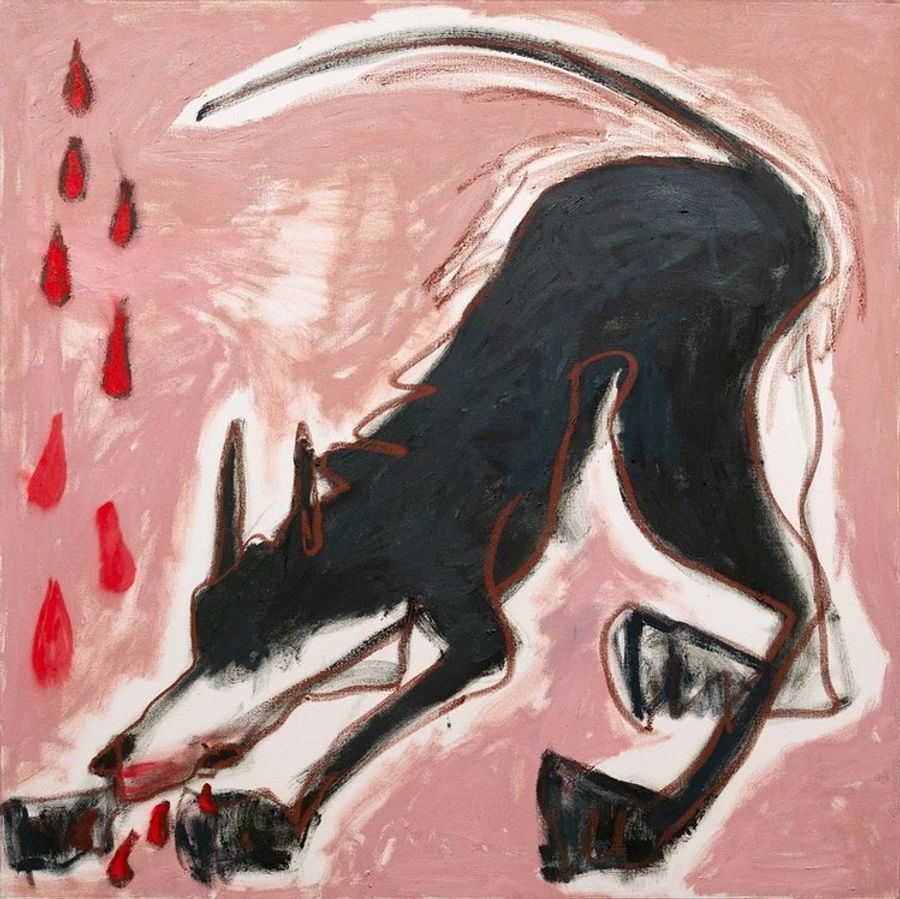 Benji: Why were you first drawn to painting? Like, what was the first moment for you where you're like, oh yeah.

Ruby: I gave it a go first off in high school when I learned a bit about George Gittoes and what he does. And I was pretty obsessed with his style of painting, like with those two colours, the way that he painted- I thought was really cool. It wasn't so polished, I was like, mad.

And then... I didn't really do any painting except for when I started art school and learned heaps more about the history of painting and then learning how to use oil paint and stuff. And I think that was the thing that I was better at. It was just really exciting and fun.

So you did go to art school?

I did my diploma and my advanced diploma at TAFE.

So that was really cool. I really enjoyed that time. I finished at the end of 2019, I think. Yeah. Just like learning from my teachers and stuff really definitely got me into painting.

So you have an affinity for painting, but I was kind of curious, do you experiment with any other mediums or is there anything else that you kind of, like, I also do this?

I pretty much just do painting at home. I really enjoy doing printmaking when I was at school, but there's so much cool history to printmaking as well, but it's just so much more accessible doing a painting. And I’m just better at that. So I just stuck with painting.

What does inspire work?

I read something about this. I like trying to work out what I'm feeling, that's the most important thing I think, and then having colour and movement as a way to express those kinds of feelings and just be present. Cause I don't really do that very often.

It sounds almost a bit meditative for you.

I don't know what else to do in that head space. Like it's a really good place to go to.

If you weren't painting, you would be doing nothing.

What is your experience like with the Newcastle's art community?

I think when, when I first started, posting a lot of my paintings I was making at school and stuff and made some really good friends during like the first lockdown.

Like Nick Barlow and I started bonding over the internet because we like each other's work and stuff. So that was my first really good connection. We became really good friends and he was so supportive of me making stuff. And he was always cheering me on.

I also met Nigel Milsom during the first COVID thing. We met and he really liked my work which is really nice. I didn't have a job at the time so he was like, ‘you should come to our studio and you can help me stretch canvas and I'll give you money’ which is so cool. He talks so much about his experience being an artist for a long career which was really cool and interesting. I think I had a bit of a naïve outlook about the kind of stuff that went down with people who have like larger art careers.

That was really sweet. And then I think from there I've met some really great people. Everyone has such a different perspective on how it works and what they want out of it. But I think the best kinds of people just wanna connect about how much they love making art and how much they like art. I find it hard to be in some social settings where it's a bit ingenuous like at some gatherings where it feels like everyone's either like talking shit or networking or whatever. I just socialize. It's hard anyway, but trying to navigate all of that can be kind of weird. But I think I've met some really cool people that just like back me and that's important. I just want to talk to people about why they like what they do I guess and not many people that don't and wanna make money.

So my next question, can you just kind of describe the structure of your art-making a little bit for me? I've talked to a lot of artists and some are like, oh, I'm very sporadic, I do it whenever. Some are very, very methodical. They're like I work from this time to this time every evening. I'm curious how you do it.

I've definitely met heaps of people that like, see it as having to work every day. But I just, I don't think I'm that kind of person at all. I guess I haven't put any pressure on myself to do it as a regimented thing.

Because I don't think that's sustainable for me and I don't think I'd put out good stuff. So when I get the feeling I want to do it, I'll do it. And if I don't feel like it, I won't do it. Back in the first lockdown, I was doing it all the time, like I made more paintings last year than I did this year. But I also had studio access, so it's kind of easier to do that and I didn't have work or go to TAFE. So I made a lot more stuff but this year has been a bit messier cause I haven't really had a studio. And when I did it was at TAFE, and just in the corner of a printmaking studio. So it was very motivating and I just had to get stuff done to put up for my course.

So running on from that, do you have a next big goal for yourself and your work?

Um, not really. I think I just want to keep expanding on making stuff that I think is good and keep getting better at painting. That's my goal. And then maybe when I'm really happy with a body of work, then I'll have an exhibition. I just want to get better at it and feel good about it. And I guess do more. Do a bit more.

What piece are you most proud of?

I don’t know. It's hard. Because there's some that I'm really proud of. That I made because it came out of just my head and other ones that I'm like, this was technically hard to do. So I don't know, like this one of these wrestlers on my Instagram. Which, I wasn't sure how that was going to go, but I really liked how realistic it looks, but that wasn't really what I was going for. I think I like the one with Ozzy Osbourne the most because it's really silly.

I Don't know. It's hard. It's hard to pick things.

I've got some in my book here. I've got Dubuffet who kind of exposed the world to art-brood and naive art really. I really like him. I really love Philip Guston. Christian Van Minnen is amazing. This guy called Wayne Horse, who's like a German guy and he does like these sketchy really dark drawings and paintings that I love.

And who else? Martin Kippenberger was a big one. For me, he's really cool and expressive. I loved seeing the kind of the stuff that was being made out of like war, for example, Otto Dicks who was a soldier in World War Two and his stuff's pretty dark, but he's a really great painter and he made some really cool prints and stuff as well.

I guess trying to figure out how to balance between- I want to be an artist but I don't see myself having it as a career. It's precious to me and I don't feel comfortable kind of like selling myself away.

That's so interesting. I actually talked to another artist recently who was like, I love making art, but I don't want to be an artist. That's not what I think I want to be.

It takes a lot of- I don't know. To suck up to gallery owners to make money from paintings that I've like slaved over emotionally. Do you know what I mean? I'd rather just work casually to make money and then make art that I really like instead of slaving away to get people to like me.

Do you ever feel like there are times when you're just uninspired or you just can't get the work out, and how do you work through that?

Yeah, I think that's been pretty prominent this year. TAFE went through some changes that really affected the experience for me. So I just kind of lost motivation to do it. Because that was just disheartening being there and being around that kind of attitude towards art-making.

But I think sometimes you just have to force yourself to do it because when you feel like you don't want to do anything, it really helps to do something creative because it gets your mind working and you can process things.

My mom always says that sometimes you just got to do the things you don't want.

Exactly. I just want to start doing things that I used to like doing more in order to get back into the groove of who I am. And I think painting is definitely one of those things that I need to practice more because it helps me just connect to myself again.

If you’re uninspired and you don't feel like doing it, don't be hard on yourself at the same time. Like you can't expect you to be on all the time.

I think it's like, there's a balance there. Sometimes you need to just do it, but other times it's if you force it you're going to make yourself sad. Because you won't be in that head space to make nice stuff that you like. I don't know. You need to rest sometimes I think is important.

Can you sum up your motto for creating in a few words?

Oh, um, did I write something? ‘Do it for yourself’. Like, do it for you, that's all that really matters.

What's the best piece of advice you've ever been given?

I've got some really funny text messages from Nigel.

This one's a good one. He loves to preach about stuff and he just would talk forever about what he thinks about institutions and the world and shit. But he's gone on this big rant about institutions and just said, "Any art worth its weight is the product of living an independent life, not from taking cover in an institution that provides steady comfort to know on what themselves."

"The real world is flushing all of our heads down the toilet. It's the flushing that flushes the art out of our systems."