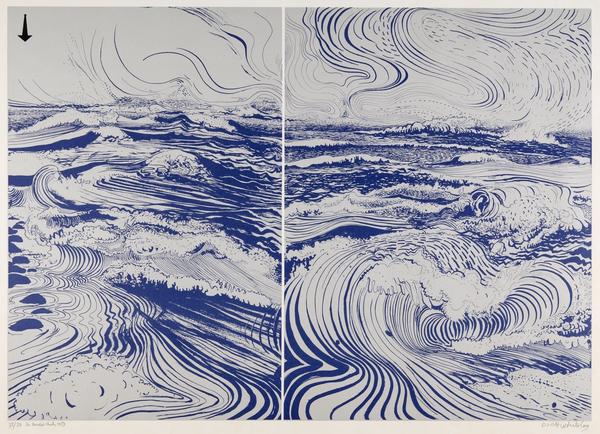 Brett Whiteley AO had main character energy. Born in Paddington on 7 April 1939, Brett grew up at Longueville, a quiet suburb on the northern shores of Sydney Harbour.

Whiteley quickly cemented himself as one of Australia's most celebrated artists. He won the Art Gallery of NSW Archibald, Wynne and Sulman prizes several times. In 1978, he famously won all three prizes at once. He worked across painting, sculpture and the graphic arts, and is best known for his sensual and energetic paintings of interiors, nudes and landscapes.

Whiteley's tumultuous, creative life was often the subject of his art. From the late 1970s, his work began to trace his heroin addiction, which increasingly impacted his life and career. Whiteley died of a drug overdose in Thirroul on the New South Wales south coast in 1992. His last studio and home in Sydney’s Surry Hills is now a museum managed by the Art Gallery of New South Wales.

"THIS IS ONE OF MY FAVOURITE OCEAN DEPICTING ARTWORKS. THE MARK MAKING TO REPLICATE THE MOVEMENT AND WHITEWASH IN WATER IS SOMETHING THAT HAS INFLUENCED MY PERSPECTIVE ON IMITATING OBJECTS AND LIFEFORMS IN A SEMI REALISTIC AND FLUID WAY." — W. JESSIE.